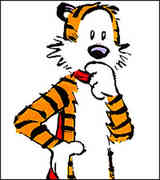 Time: November 18, 2020 all day
Location: the not so distant past
Website or Map: https://calvinandhobbes.fando…
Event Type: historical
Latest Activity: Mar 12, 2020

By the time Bill Watterson wrote the Tenth Anniversary Book, he had changed his opinion about Calvin and Hobbes's first meeting, saying it was unnecessary and even detrimental to the feel of the strip. Much later, it is apparent in several strips that Hobbes and Calvin have known each other their whole lives, including when Calvin was an infant. This contradicted the first two strips, which show Calvin and Hobbes' first meeting.

Hobbes shared his final appearance with Calvin in the final strip published on the 31st of December 1995.

Hobbes is named after 17th-century philosopher Thomas Hobbes, who had what Watterson described as "a dim view of human nature." Thomas Hobbes is famous for his claim that humans' natural state is one of war, and that there "the life of man [is], solitary, poor, nasty, brutish, and short." Hobbes' personality does not match with the philosopher's worldview.

Hobbes is often the voice of reason, contrasting Calvin's manic impulsiveness. Readers are left to wonder if this rationality is in Hobbes as a distinct personality, or in Calvin as a kind of conscience. In the end, the question becomes less about absolute truth and more about different versions of reality: the nature of Hobbes' existence was never a puzzle to be solved, but rather a subtle comment on the power of imagination, and on the similar power of a lack thereof. All in all, Hobbes is real if one believes he is. In some comics where Calvin has a math problem, he is as dumb as Calvin and makes up math formulas such as "Y as in Y do we care?". However, he may just be fooling Calvin, shown with his reaction to Calvin believing three dimes was less than a quarter: "I think you better study harder."

In one comic where Calvin asks Hobbes what 3+8 is, so Hobbes teaches Calvin, "Well, first you assign the value as X. X always means multiply, so you take the numerator [that's Latin for "number eighter"], and you put that number on the other side. Then you take 3 from the other side, so what times 3 equals 8? The answer, of course, is six.") This, however, is most likely intentional. Hobbes still claims that his knowledge of "math theories" is from instinct.

Hobbes also refers to the infamous "Noodle Incident" quite often, much to Calvin's dismay. Calvin is very defensive about it and gets mad when Hobbes makes a reference.

Sometimes Hobbes breaks the fourth wall and speaks directly to the reader, such as when Calvin tries to parachute from his house's roof ("His mom's going to have a fit about those rose bushes").