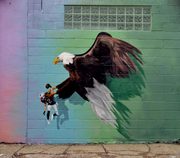 The first Monday Night Football is broadcast with the pairing of Howard Cosell and Dan Meridith.

Monday Night Football first aired on ABC on September 21, 1970, with a game between the New York Jets and the Browns in Cleveland. The show captured 33% of the viewing audience that night.

The Browns defeated the Jets, 31-21 in a game which featured a 94-yard kickoff return for a touchdown by the Browns' Homer Jones to open the second half, and was punctuated when Billy Andrews intercepted Joe Namath late in the fourth quarter and returned it 25 yards for the clinching touchdown.

However, Cleveland viewers saw different programming on WEWS-TV, because of the NFL's blackout rules of the time (this would apply for all games through the end of the 1972 season; beginning in 1973, home games could be televised if tickets were sold out 72 hours before kickoff).

One of the trademarks of Monday Night Football is a music cue used during the opening teasers of each program, a Johnny Pearson-composition titled "Heavy Action", originally a KPM production library cue (and also used as the theme music for the BBC program Superstars), which MNF began using in 1975.

That success would continue over the course of the season, helping establish a phenomenon on Monday nights in the fall: movie attendance dropped, bowling leagues shifted to Tuesday nights and a Seattle hospital established an unwritten rule of no births during games

Cosell's presence initially caused Henry Ford II, chairman of the Ford Motor Company, the program's main sponsor, to ask for his removal. ABC refused, and Ford had a change of heart once the show's ratings were made public. Cosell dodged another controversy when he appeared to be intoxicated on-air during the November 23 game between the New York Giants and Philadelphia Eagles.

Already ill, Cosell drank at a promotional party prior to the game, then ended up vomiting on Don Meredith's cowboy boots near the end of the first half. Jackson and Meredith ended up announcing the rest of the contest.

And the rest is history.