The only constant in British politics is Larry The Cat.

In May, Teresa May stepped down.

In October, Boris was squashed.

But our guy Larry (often thought of as a lazy lapcat and not a good mouser ) kept working for the people, making appearances on the street to the delight of tourists. 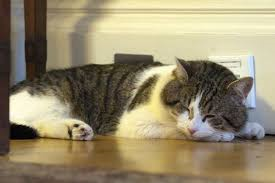